by Rio
in Sports
0

Despite the fact that e-sport formally originated in the 1970s, it has only recently begun to be taken seriously. In a very short time, video game competitions have moved from small gaming cafes to stadiums with tens of thousands of spectators. But even now, cybersports have not reached a fraction of their potential.

Cybersports 2022 claims to be a comprehensive development. It will also be influenced by another industry, cybersports betting. They even have some things in common, such as both industries bring good rewards to players.

Looking at the popularity of cybersports disciplines, increasing budgets and the number of sponsors, we can assume that in the near future the industry will move to a completely new stage of development.

The success of any sport depends primarily on its financial success. Thanks to investments and advertising revenue, the cyber sports industry is more successful than ever. Big brands sponsor teams. The prize funds of tournaments are huge, and the salaries of some players sometimes exceed the salaries of some soccer players. However, the industry is still young, so the financial situation is still unstable.

The number of spectators of cybersports tournaments is constantly growing, which also has a positive effect on the income of the organizers.

In the future, not only the economics of cybersports will change, but also the games themselves. Now one of the main goals of the industry is to attract new viewers who have never been interested in online tournaments before. The developers’ plan is to create a game that is understandable even to those who are not familiar with the gaming industry. At the moment, there is no such game. As soon as there will be a discipline in cybersport that can enthrall the average person, the industry will make a huge leap forward. If such cybersports games don’t appear soon, it won’t be long before cybersports will equal traditional sports.

Large organizations are opening their own academies where young talent is rushing in. Some of them are already surpassing professional cyber athletes. This method will not help buy players from competitors, but transfer them from the reserve team to the main roster. Perhaps this year there will be leagues just for teenagers under the age of 18.

The organization of competitions also affects the popularization of eSports. A few years ago it was very difficult to figure out the structure of tournaments, next year it is planned to hold competitions centrally.

Also in the future there will be many times fewer “one-win” matches in all disciplines. Today, all team disciplines are moving to conditions with a minimum of randomness.

Will COVID affect the industry? 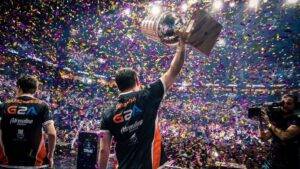 Because of the pandemic, cyber sports became almost the only type of competition. But there were also many negative aspects. For example, many major cybersports tournaments were either cancelled altogether or held online.

On the other hand, holding competitions online only garnered a larger audience.

One could say that covid had a negative impact on the cybersports industry only in the beginning. Subsequently, games were played without problems, which will continue in the future.

Unfortunately, predictions for cybersports suggest that in 2022 this sphere will not stand up to hockey, soccer and other major sports. First, it is hindered by the excessive cruelty of some games. Second, the lack of any governing and supervisory body.

Gino Pozzo on the Verge of Agreement for New Club Acquisition

3 Ways To Adjust Your Tennis Game As You Get Older

3 Ways To Adjust Your Tennis Game As You Get Older

Know Your Ideal Swing for Every Club

What Are The Benefits Of Cricket For Your Development?

No Result
View All Result